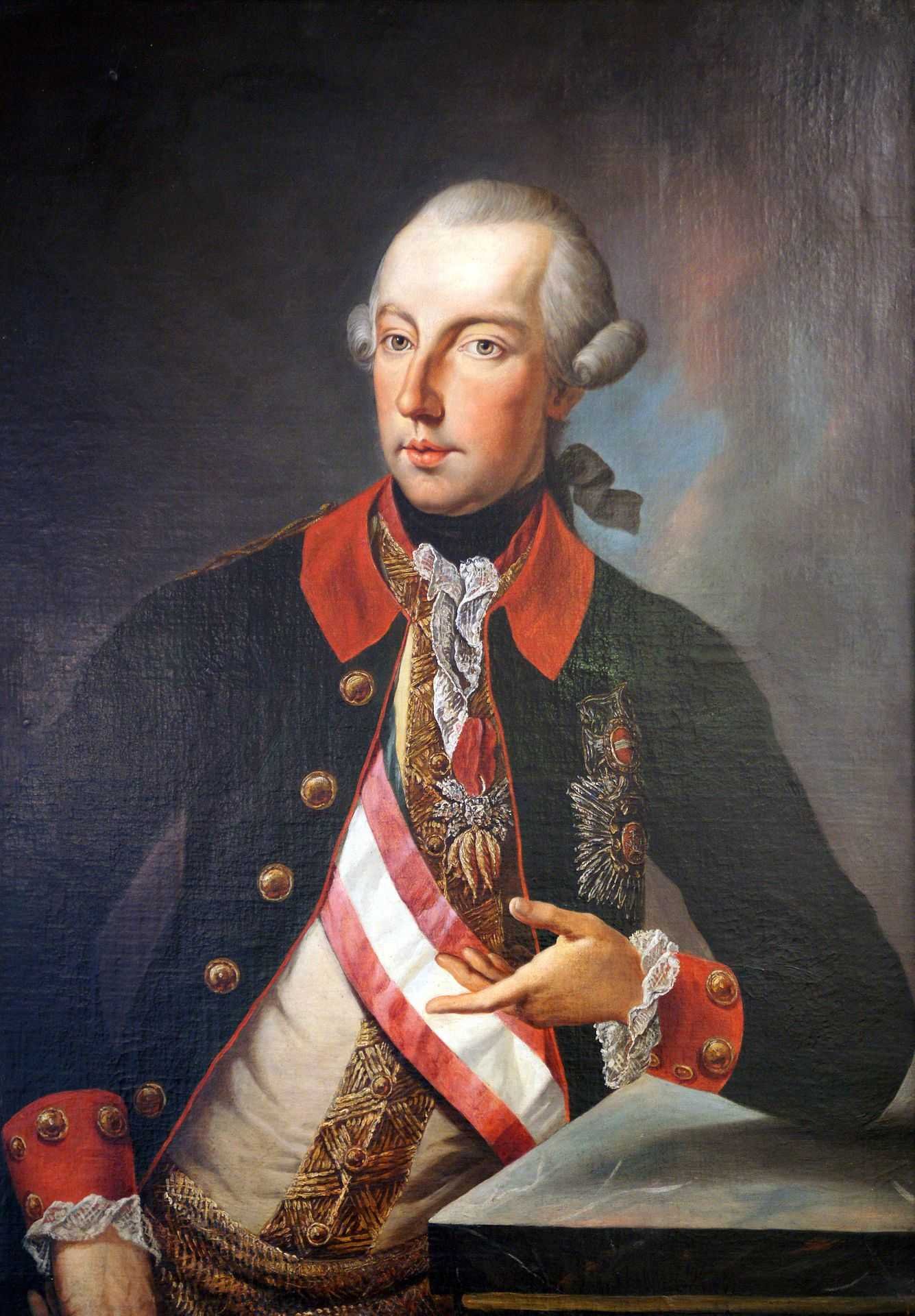 War Of The Bavarian Succession

Joseph, the eldest son of Marie-Thérèse and François Étienne de Lorraine (the future Emperor François I), was strictly and fully educated. When Marie-Thérèse appointed him to the Council of State, he displayed an unusual intelligence and an intense interest in politics. Joseph’s first marriage in 1760 to the Bourbon princess Isabelle of Parma, whom he loved passionately, ended in tragedy, dying of smallpox three years later. In 1765 he married Maria Josepha of Bavaria, who in 1767 also died of smallpox. His inability to make decisions necessarily limited his ambition. After the death of his father in 1765, he became emperor, but Marie-Thérèse made all the important decisions.

After his death in 1780, Joseph tried to complete his work of reform. The education system had been consolidated throughout the monarchy. For the University of Vienna, which was no longer under the influence of the Church, Joseph tried to find the best scholars and scientists. The judiciary and the executive were already separate at the top; Joseph extended this process to lower administrative levels. In 1786, the Universal Code of Civil Law was published. Under Maria Theresa, the physician Gerard van Swieten had organized a public health service, and in Joseph’s time, the General Hospital in Vienna was considered one of the best equipped in Europe. The finances of the monarchy were balanced. The reorganization of the army secured Joseph’s position in Europe. He ordered the abolition of serfdom; by the edict of tolerance, it established religious equality before the law and grants freedom of the press. The emancipation of the Jews in a short period of time gave new vitality to cultural life. Vienna’s artistic life reached new heights when the Burgtheater became the German National Theater. By transferring the management of theaters to the actors, Joseph introduced an artistically fruitful concept.

Joseph’s conflict with the Roman Catholic Church, however, posed more difficult problems. He created national training schools for priests, deprived bishops of their authority, and limited their communications with the Pope. The power of the Church was further affected by the dissolution of more than 700 monasteries not engaged in useful activities such as teaching or hospital work. The 36,000 monks forced to quit their orders received an annuity or money to return home; those who returned in this way could continue as secular priests. Certain measures intended to prevent a relapse into monasticism, such as the founding of new parishes, have given good results. The emperor’s impatience to expel the monks from the monasteries, however, caused the destruction of many works of art. At the height of the crisis, Pope Pius VI visited the Emperor in Vienna, but the visit did not change anything; nor a subsequent trip by Joseph to Rome. Joseph’s passionate zeal to change everything and impose a new form of life on his subjects met with stiff resistance, mainly in countries as strongly traditional as the Austrian Netherlands and Hungary.

Joseph was made a member of the constituted state council (Staatsrat) and began to write a record that his mother could read. These papers contain the seeds of his subsequent policy and all the disasters that eventually overtook him. He was a friend of religious tolerance, anxious to reduce the power of the Church, relieve the peasantry from feudal burdens, and remove restrictions on commerce and knowledge. In this, he was no different from Frederick, or his own brother and successor Leopold II, all enlightened rulers of the 18th century. He tried to free serfs, but it didn’t last after his death.

Where Joseph differed from the great rulers of today, and where he resembled the Jacobins, was in the intensity of his belief in the power of the state when ruled by reason. As an absolutist leader, however, he was also convinced of his right to speak for the state uncontrolled by law, and of the sensitivity of his own government. He had also inherited from his mother the belief of the House of Austria in its “august” quality and its claim to acquire whatever it deemed desirable for its power or profit. He was unable to comprehend that his philosophical plans for the molding of humanity could meet with forgivable opposition. [6] Joseph has been documented by contemporaries as impressive, but not necessarily likable. In 1760, his arranged wife, the well-educated Isabelle of Parma, was handed over to him. Joseph seems to have been completely in love with her, but Isabella preferred the company of Joseph’s sister, Marie Christine of Austria. The emperor’s disproportionate character was evident to Frederick II of Prussia, who, after their first interview in 1769, described him as ambitious and capable of setting the world on fire. French minister Vergennes, who met Joseph while traveling incognito in 1777, deemed him “ambitious and despotic”. After his father’s death in 1765, he became emperor and was appointed co-regent by his mother in the Austrian dominions. As emperor, he had little real power, and his mother had resolved that neither her husband nor her son would ever deprive her of sovereign control of her hereditary estates. Joseph, by threatening to resign from his place as co-regent, could lead his mother to appease his aversion to religious tolerance. He could and did exert a great strain on her patience and temper, as in the case of the First Partition of Poland and the Bavarian War of 1778–1779, but in the last resort, the Empress had the last word. Therefore, until his mother’s death in 1780, Joseph was never quite free to follow his own instincts.

During these years Joseph traveled a lot. He met Frederick the Great privately in Neisse in 1769 (later painted in The Reunion of Frederick II and Joseph II at Neisse in 1769), and again in Mährisch-Neustadt in 1770; the two leaders got along well at the start. On the second occasion, he was accompanied by Count Kaunitz, whose conversation with Frederick can be said to be the starting point for the first partition of Poland. To this and any other measure that promised to expand the domains of his house, Joseph gave a warm approval. Thus, when Frederick fell seriously ill in 1775, Joseph assembled an army in Bohemia which, in the event of Frederick’s death, was to advance into Prussia and reclaim Silesia (a territory which Frederick had conquered from Maria Theresa during the War of Succession from Austria). However, Frederick recovered and subsequently became suspicious and suspicious of Joseph. Joseph was also eager to assert Austria’s claim to Bavaria on the death of Elector Maximilian Joseph in 1777. In April of that year he visited his sister the Queen of France, Marie Antoinette d ‘ Austria, traveling as “Count Falkenstein.” He was well received and greatly flattered by the encyclopedists, but his observations led him to predict the impending fall of the French monarchy, and he was not favorably impressed by the military or the French Navy. In 1778 he commanded the troops assembled to oppose Frederick, who supported the pretender rival in Bavaria. It was the Bavarian War of Succession. The real fighting was avoided by Frederick’s refusal to launch into a new war and by Marie-Thérèse’s determination to keep the peace. However, the war cost Joseph most of his influence over the other German princes, who were suspicious of his potential plans on their lands, and viewed Frederick as their protector. As the son of Francis I, Joseph succeeded him as titular duke of Lorraine and Bar, who had been handed over to France at his father’s marriage, and titular king of Jerusalem and duke of Calabria (as agent of the kingdom of Naples)

With his father’s death, Joseph also became his mother’s co-regent and took over the handling of the army and foreign affairs. In foreign matters, Joseph’s attempt to exchange part of the Austrian Netherlands for Bavaria was undermined by Frederick II of Prussia.

Although Joseph was co-regent, Maria Theresa maintained control of the empire. His mother made some changes that Joseph supported, such as the expansion of elementary education in the 1770s. But Marie-Thérèse opposed the idea of ​​religious tolerance and refused to institute reforms that Joseph, a disciple of the Enlightenment, desperately wished.

On the death of Maria Theresa in 1780, Joseph became the absolute ruler of the Habsburg estates and enacted many reforms his mother had refused to consider. During his reign, Joseph issued an average of 690 degrees per year. Maria Theresa had done less than 100 each year. Joseph’s reforms included the abolition of serfdom, the end of press censorship, and the limitation of the power of the Catholic Church. And with his edict of tolerance, Joseph gave minority religions, such as Protestants, Greek Orthodox, and Jews, the ability to live and pray more freely. Joseph was viewed as an “enlightened despot” and his reforms were open-minded to a point. However, Joseph’s main goal was to make the empire more efficient and financially secure. Believing that he was doing what was right and necessary, Joseph did not bother to make it easier for nobles or clergy who felt threatened by his changes.

Joseph’s reforms convinced the inhabitants of the Austrian Netherlands that their historical privileges were not being respected. Hungarian nobles tried to reject Joseph’s decrees on the grounds that there had not been an official coronation. Even the peasants were often more concerned with the taxes demanded by the empire than with their new freedoms. Joseph also encountered difficulties outside his empire. To counter the strength of Prussia, Joseph forged an alliance with Catherine II of Russia, which brought the empire into conflict in Turkey. This stretched the empire’s resources and also opened the door to more unrest.